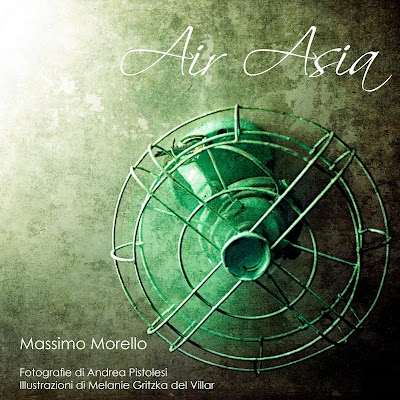 The book introduction:
It’s hard to understand Asia. Glimpses of it can be gained by giving in to the sensations it arouses, without trying too hard to find an explanation. Like meditation, following the flow of the breath. This is still a place of hidden, if not invisible, presences that can rise up or be generated by the breath of wind, or dissolve the thoughts you had in your mind like wisps of cloud vanishing on the breeze. In that instant, sensations and intuitions often take the shape of a symbol. After all, Asia is the world of symbols, the empire of signs, and they can at times be the magical formula for beginning to understand it. Air Asia is the definition, the title for one of those symbols: the fan. That airflow, which causes strange and unpredictable effects, can carry stories, like the incense smoke in a temple that forms evocative shapes in the air as it rises. Air Asia came into being this way, by observing the thoughts and stories brought on by a breath of air in hot Southeast Asia. Someone once wrote: “The breath of Asia is beyond”